For a large number of people the textiles and art forms of south India are synonymous with Kanjeevaram. But little do they know that southern India has various forms of painting styles and textiles. Kalamkari is one of the most important art form of southern India and Srikalahasti is the hub of all the Kalamkari activity.

In fact Srikalahasti is famous all over the world for its Kalamkari artists and paintings. It is home to this beautiful art form, the pride of the region. At Srikalahasti the Balojas, a caste which was originally involved in making bangles took this art form to great heights. 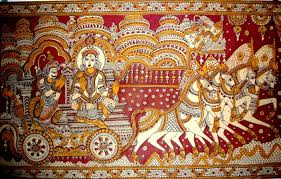 Kalamkari is basically a type of hand painted or block printed cotton textile. The word Kalamkari is derived from Persian – kalam means pen and Kari means drawing, literally translating to drawing with a pen. In India there are two broad categories or styles of Kalamkari –

In the Srikalahasti style the pen is used to draw free hand motifs and patterns and color is used to fill these designs. All this entirely hand worked. Only natural dyes are used for coloring and the entire process involves seventeen steps. 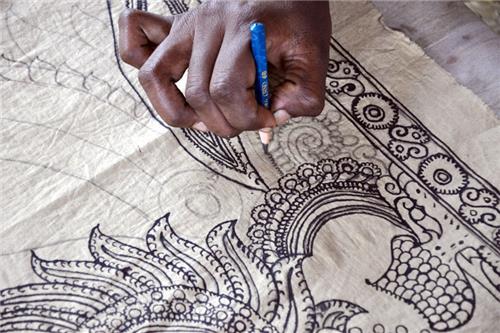 With the advent of time this fine art form started dwindling because of the lack of buyers. Post independence the Handicrafts Development Board took up the task of reviving this art. The Srikalahasti style of Kalamkari owes a large chunk of its current status and popularity to Smt. Kamaladevi Chattopadhayay who popularized the art as the first Chairperson of the All India Handicrafts Board.
This style has a lot of figures of deities and religious influence. Srikalahasti Kalamkari tradition has many scenes taken from Hindu mythology. Scenes are taken from Ramayana, Mahabharata, the Puranas and other ancient epic texts. Traditionally figures of deities with rich border embellishments were created for the temples. But later all these designs and patterns got moulded into the routine painting style as well.

In ancient times singers, artists and painters used to travel from village to village to tell the villagers the ancient Hindu mythological tales. With the passage of time these artisans started illustrating their work on large canvases from dyes obtained from plants. In many Hindu temples one could find large panels of Kalamkari depicting the episodes of Indian mythology, something similar to the stained glasses in a cathedral.

The art form got a lot of popularity in the wealthy Golconda Sultanate, Hyderabad during the Mughal rule. It is said that The Mughals who patronized this craft in the Coromandel and Golconda province. The practitioners of this craft were called Qualamkars, from which the term Kalamkari evolved. Owing to Muslim rule in Golconda, the Masulipatnam Kalamkari was influenced by Persian patterns and designs. Under the British rule the designs as well as the end use of the fabric differed - for garments as well as furnishings. During this period floral designs were popular. The artisans were made to create even portraits of English men.

The art form started dwindling again but since the 18th century it has seen a new light and today it is well known art form of southern India.

The technique of creating Kalamkari masterpieces involves a lot of precision and practice. There are many artists in Andhra Pradesh who have been in this business for many generations. The cotton cloth is dipped in a mixture of cow milk and Myrobalans (a fruit bearing plant) for an hour. This gives it a glossy finish. Myrobalans also eliminate the smell of the milk. The artists use a bamboo or date palm stick pointed at one end with a bundle of fine hair attached to this pointed end to serve as the brush or pen. The various fixing agents in the Myrobalans help the dye easily get fixed to the cloth. 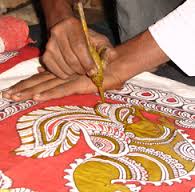 As mentioned above that only natural dyes are used for coloring. Red color is obtained from Indian madder, Yellow from Myrobalan flower, Blue from Indigo plant and Black from Iron fillings and sugar molasses. These dyes are obtained by extracting colors form parts of plants - roots, leaves along with mineral salts of iron, tin, copper, alum, etc., which are used as mordants. Alum ensures the stability of the color in Kalamkari fabric. After applying each color the fabric is washed and dried. It I estimated that each fabric undergoes approximately 20 washes before the final product is ready. The Kalamkari work was a further embellishment to the gold brocade work in the woven fabric.
The specialty of the end product is its finish and class. Although a lot of bright colors are used, they don’t look very gaudy. As you keep wearing and washing the cloth, it starts looking prettier. The designs stand out even better against the background.

Srikalahasti is the most popular centers of Kalamkari in Andhra Pradesh. In this region itself there are more than 150 craftsmen practicing this ancient art form. 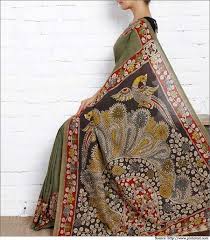 Some of the main characteristic features of Srikalahasti Kalamkari include the following –
Although initially the Kalamkari fabric was limited to ritual cloths of temples and textile material, but now the artists are keeping in mind the varying demands. Now you can find Kalamkari table cloths, folders, letter holders, dinner mats, greeting cards, bags, files and even wall hangings.